Indonesian citizen, 57 years old. Serving as President Director in accordance with the Resolution of the AGMS dated 26 June 2001. He previously served as Vice President Director of the Company in 1996–2001. He began his career as Executive Management Trainee at Toyota Motor Sales, USA, in 1986–1987, Assistant Manager–Corporate Banking at the Chase Manhattan Bank, N.A. in Jakarta in 1990–1991, and as Director of PT Multi Investment Ltd in 1993–1996. He was awarded Indonesia Ernst & Young Entrepreneur of The Year in 2013 and represented Indonesia at the Annual Ernst & Young World Entrepreneur of The Year in Monaco in 2014. He graduated with a Bachelor’s degree in Marketing Management from The American College for the Applied Art, Los Angeles, in 1989. Domicile : Indonesia Basis of Appointment : The Resolution of AGMS dated 26 June 2001

The Jok Tung
Finance Director
I 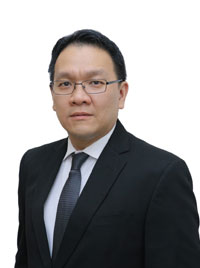